On Saturday, February 13th, we wrapped up the 2021 Give A Kid A Coat campaign, and on Monday, we published a press release saying thanks and sharing this year’s stats.  But I always feel like that’s a bit of an anti-climactic way to end such a monumental event because Give A Kid A Coat has evolved over the years into so much more than a coat drive.

I have to wonder if on October 26, 1987, when that first coat was donated by Kyle Petty and his son at The Salvation Army headquarters in Greensboro, Ray and Sallie Edwards had any idea that their little coat drive would become a community-wide event that would bring folks together.  That people like Barbara and James Beck, for years, would purchase new coats throughout the year and donate them at the kickoff event, and Emily Vail would spend all year crocheting scarves to donate to the campaign.  And don’t forget about the countless churches, schools, and businesses that scour their neighborhoods collecting coats.

Then there’s the rest of us, who collectively make this project work.  The families that drop off 1, 2, or 3 outgrown coats.  Our staff members that work late or come in on Sunday afternoons to clean coats.  The folks at The Salvation Army that tirelessly work picking up coats, setting them up, manning distribution points, and helping folks find just the right coat.  Let’s not forget about Fox 8, Rock 92, and 1075KZL who provide notices and information to keep this worthwhile project on the radar.

While Give A Kid A Coat is well-oiled machine, it only works when everyone participates.  So thank you for your role in this little coat drive that we love with all our hearts.

Giving Back
coat driveGive a Kid a Coat 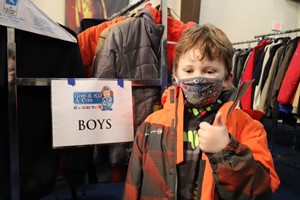