We Recycle Our Poly Bags

The fine folks at N. S. Farrington went far and above responding to our request; they constructed recycling stations and began hauling bags of bags after making wholesale deliveries, and just two years later, they were recycling bags from more than 150 of their North Carolina customers. In 2014, they announced that, since its inception in 2010, their program had recycled over 60,000 pounds through the first quarter of 2014, saving over 6,700 cubic feet of landfill space.

The Impact of Recycling our Poly Bags

I recently touched base with Michael Ross of N. S. Farrington to get an update on how the program was going. In 2014, we reported that ‘every ton of poly film that is collected will save the equivalent of 17 trees, 380 gallons of oil, 7000 gallons of clean water, 4100 kilowatt hours of electricity, and 89 cubic feet of landfill.’ Michael confirmed that is still true today. In fact, N. S. Farrington currently recycles one ton of low, medium, and high-density polyethylene plastic per month.

We are so grateful to the folks at N.S. Farrington for the effort they put into their recycling program, and we are thrilled to be part of it. It just goes to show that one person can bring about change; a simple phone call led to an initiative that’s making a real impact. And we’re not stopping there. We are constantly looking for ways to reuse, recycle, and reduce not only at A Cleaner World but in our homes and throughout our community. 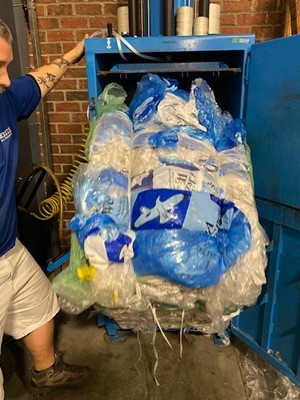