While A Cleaner World Commercial and Uniform Services doesn’t rent or service brooms, I felt like the topic was relevant for home use. I use a wet mop at home weekly to mop the kitchen floor, but in the summer, I use a broom almost daily both inside and out to sweep up dirt tracked into my kitchen and to spiffy up the patio and porch.

It’s hard to say exactly when brooms were invented but sweeping was mentioned in the New Testament of the Bible. Several sources say that the quality of brooms changed in 1797 when Levi Dickenson, a farmer in Massachusetts, made a broom, which held up quite well, for his wife using the tassels of sorghum. When word of the new broom spread around town, folks wanted one. Sadly, like all brooms, these too fell apart until Mr. Dickenson invented a machine that would make better brooms at a faster rate, and in 1810, the foot treadle broom machine was invented.

Believe it or not, there are all kinds of oddball brooms out there from those designed to sweep snow to a power broom that is paired with a shovel. But there are three brooms that my parents had when I was growing up that I too now have, and I believe that’s all you’ll ever need at home.

Brooms are convenient tools, especially in the summer months, but if you’re looking to clean a large area, especially in a warehouse, consider contacting Scottie Springer 336-870-6299 to learn more about our handy dry mops. 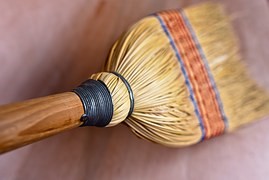