I tend to lump Police Officers, Firefighters, and Military Personnel into one group in my head – the Sacrifice for Others group.  They don’t always get the respect that they deserve.   They definitely don’t get paid enough for what they are asked to do.  Their families watch them walk out the door and wonder if this will be the last time they see them.  Talk about sacrifice.

Police Week is a weeklong ceremony in the United States that honors federal, state, and local officers that have died or who have been disabled in the line of duty.  The holiday, which is officially on May 15, was created on October 1, 1962, when President John F. Kennedy signed a bill from Congress into law.  Formal services are held on May 15, with the weeklong celebrations occurring during the week in which the specific date falls.

I appreciate that Congress and President Kennedy recognized the important role that Police Officers play in our communities, but I feel as citizens, we also ought to try to show appreciation.  I debated on whether to share this or not because I don’t want it to seem like I’m tooting my horn.  I share these things to show that little acts of kindness and appreciation go a long way.  That’s why whenever I’m at a restaurant and a uniformed officer comes in, I pay for their lunch.  There’s an officer that directs traffic in front of an elementary school every morning, and every morning I drive by him after dropping off Gray at his school.  Sometimes if it’s super cold, I’ll take him a cup of hot chocolate, and on exceptionally hot days, I’ll hand a cold bottle of water out the window to him as I drive by.

A Cleaner World also likes to show appreciation, especially to folks that always put others first.  That’s why, next Wednesday, May 15, on Police Officer Memorial Day, we’ll clean one uniform per officer for free for uniforms dropped off on that day.  It’s not much, but it’s our way of saying thanks. 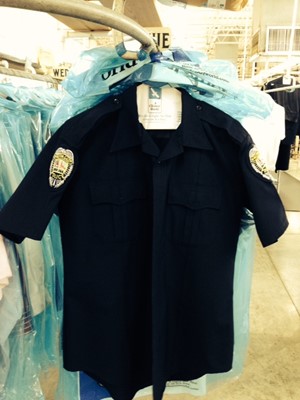