I’ve decided that I don’t like it when A Cleaner World folks retire. It’s not that I’m jealous; I still love what I do and plan on doing it for as long as they will have me. It’s that so many of us have been with A Cleaner World for so long, I feel like my family is breaking apart. So, when Mike Smith sent me an e-mail in January saying that Glenn was retiring, I immediately gave him a call.

“It’s true,” Glenn said. “A Cleaner World has been good to me. I’ve enjoyed the business, and I’m going to miss the people, but I’m tired.” I can see that; Glenn typically worked 70 hours a week and had been in the dry-cleaning business for 39 years, 19 of those years with A Cleaner World. He got started in this business like so many folks do – he simply needed a job. Over time he was promoted and held various positions before coming to A Cleaner World 19 years ago. He's stayed in this industry partly because it was in his blood but mostly because he loved the people – both his staff and his customers.

As far as what the future holds for Glenn, he’s not sure except for this one thing – he’ll be spending a lot of time on the golf course. After having some down time for a month or two, he’ll likely find a little something to do on the side.

As for his store on Leesville Road, it’s being left in good hands. Shannon Manley, who used to manage the A Cleaner World on Davis Drive in Cary, will be taking over. We wish Glenn all the best in this new chapter of his life; he will surely be missed. 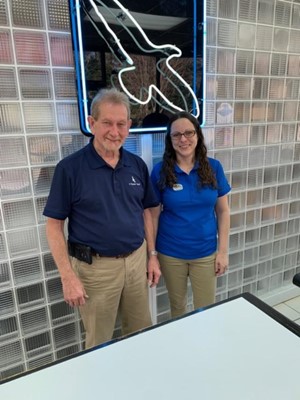