Everything You Did (and Didn't) Want to Know About Lint

Just when you think you’ve taught your child everything they need to know, they come out with this question: “What is this gray fuzzy stuff in my belly button?” “Well son, that’s lint,” I replied. “How did it get there,” he asked. And the conversation went downhill from there. But in explaining the source of lint and how it forms, I had my own set of questions like “Why does it always seem to be gray?” and “Why does it accumulate in one’s belly button?”

It is a buildup of small pieces of yarn, fiber, and thread that detach from a piece of clothing and then stick to another place they come in contact with. Along the pieces of textile, other things like hair, dead skin cells, dust, pollen, and plant fibers tend to mix in.

Pieces of fabric and yard break off because of friction, whether it’s from wearing our clothes or when they go through the washer and dryer.

What does lint do to our clothing?

As these pieces continue to break free from the weave, they will eventually cause the fabric to become thinner. For example, think about how your bath towels feel when they are brand new versus how they feel when they are several years old. In addition, think about how unprofessional lint looks when seen on clothing. For this reason, you may want to use a lint remover or brush to make clothing look more manicured. And because friction tends to create lint, consider using vinegar in your rinse cycle to reduce static cling.

Why is it gray?

Most wardrobes are a mix of blue, gray, and black with smidge of other colors sprinkled throughout; this random mashup typically ends up being some shade of blueish gray every time.

What should I do with it?

You find most lint in your dryer’s lint filter, and because it is flammable, A Cleaner World recommends you clean the filter after each load for both safety and efficiency reasons. Here’s an important note; failing to clean your dryer’s lint filter is the leading cause of home dryer fires. While you can compost it or use it as kindling, most folks just throw it in the trash.

And the “How does it end up in your belly button?” question. I’ll let you Google that one. 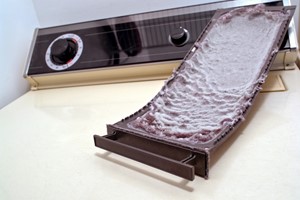