In mid-November, I received a phone call from Blacksburg A Cleaner World franchise owner Norman Fitzwater. It was a typical phone call where he updated me on a few happenings at his store, but then he wrapped up the call by telling me that he and Joyce were retiring effective December 28, 2019. And I have to admit, my heart was sad; I’ve never known A Cleaner World without Norman.

How It All Started

Norman and Ray (Edwards) had been long-time friends when Norman approached him in March of 1992 about becoming an A Cleaner World franchisee. Ray’s initial response was that A Cleaner World no longer franchises, but during the course of their breakfast meeting, something changed Ray’s mind. They wrapped up their meeting with Ray saying, “I’m a Hokie. You’re a Hokie. Joyce is from Christiansburg. I’ll let you open a franchise location in Blacksburg.”

The following month, Norman started training in High Point with Mike Feudale, by August 1992 he’d moved to Blacksburg, they broke ground on September 1, 1992, and opened their location on December 4, 1992. On their first day of operation, they did 1 sweater (which was Joyce’s cousins) and 4 shirts, and Norman had an “oh crap, what have I done moment.” But over time, they slowly built their business, many times working until 9:00 or 10:00 at night to make sure everything was perfect.

Their big break came in April 1993 when Virginia Tech decided to get out of the laundry business and called on A Cleaner World. This relationship helped provide steady business when retail dry cleaning was slow, like it typically is in the summer months.

While those things help get business in the door, you have to do the right things to keep customers, and Norman and his crew have figured that out. Their philosophy of providing great customer service, being fair, being consistent, and doing the right thing is why the Blacksburg location is one of the busiest stores in the company. Plus, their philosophy of treating their staff like family is why most of their full-time folks have been there for nearly 20 years.

The silver lining in all of this is that Marcus Moore, who has been part of Norman’s team since 2001, and his wife Stacy are the new owners. Marcus is no stranger to A Cleaner World Blacksburg; he started working for Norman part-time during his senior year in high school, and for the past 2 years, Marcus has run the business with Norman being there for support. Marcus is a hometown guy – raised in Blacksburg, and his wife is a VA Tech grad; needless to say, they are both HUGE Hokie fans. I’m certain we’re all in good hands.

A Cleaner World would like to wish Norman and Joyce Fitzwater much joy and happiness in this next chapter; they will be greatly missed. In closing, Norman asked that I express gratitude to Ray and Chris Edwards for the opportunity, and to Mike Smith, Kevin Lawson, and Mike Taylor for always being there for him. 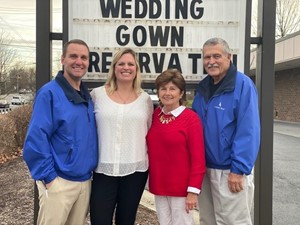